The Oscars - How Does the Academy Work?

On February 10, 2020, the stars of Hollywood gathered in Los Angeles for the 92nd time. This time, like all the times before, the Academy revealed the most distinguished works of the past year. Yes, Brad Pitt finally joined the list of Oscar-winning actors, Joaquin Phoenix got some much-deserved recognition, according to many, and “Parasite” became the first Korean movie to win not one but four awards.

The red carpet with the stars’ looks and their personal lives also became a topic of discussion, as usual: Anything new about Jennifer Aniston and Brad Pitt? Keanu Reeves came with his mom, did you see? Tom Hanks and Charlize Theron made the lights come back on at the stage!

However, leaving aside the celebrity gossip, one question still remains unanswered: how exactly are these distinguished works of film chosen, and by whom?

The Academy of Motion Picture Arts and Sciences was founded by the creator of Metro-Goldwyn-Mayer (yes, “Tom and Jerry”) Louis Mayer in 1927. The main idea was the resolution of conflicts between employers and employees - Mayer wanted to leave the unions out of his business and fix the industry’s image himself. Two years later, in 1929, the first awards ceremony for distinguished works of film was held. Since then, by the time the 2020 ceremony came around, the Academy has been joined by about 8 thousand members.

Who are the Academy members? Of course, they’re people who are informed about cinema and its technical sides - directors, actors, script writers, cameramen, costume designers, visual effects specialists etc. To put it shortly, the nominees in each category are chosen by professionals of that same category. The only exception is the Best Picture nomination - all members of the Academy votre for their favourite in this category, but we’ll get into this issue in more detail a bit later.

The difficulty is that the membership of the Academy is acquired for life. This means that the people who haven’t worked in the movie industry for years and may not even be following current events still make decisions to choose the best ones every year.

A 2012 study by the LA Times showed that the majority of the Academy members were white men, with the average age of 62 and only 14% of them being below 50. After this, the 2016 social campaign #OscarsSoWhite was launched because only white actors were present in all of the main categories.

In short, it became clear that the Academy members went slightly amiss when it came to contemporary expectations. The Academy tried to find a solution and limited the participation of retired members in the voting process, but this in turn made people accuse them of discriminating against old people.

“It's a thinly veiled ploy to kick out older white contributors, the backbone of the industry"”, declared actor Tab Hunter, who was 85 in 2016. The news was disturbing for the 91-year-old Robert Bassing. He interprets the offer as, "We're going to put you in a very comfortable cattle car."

In response to these protests, the Academy left the voting system untouched. 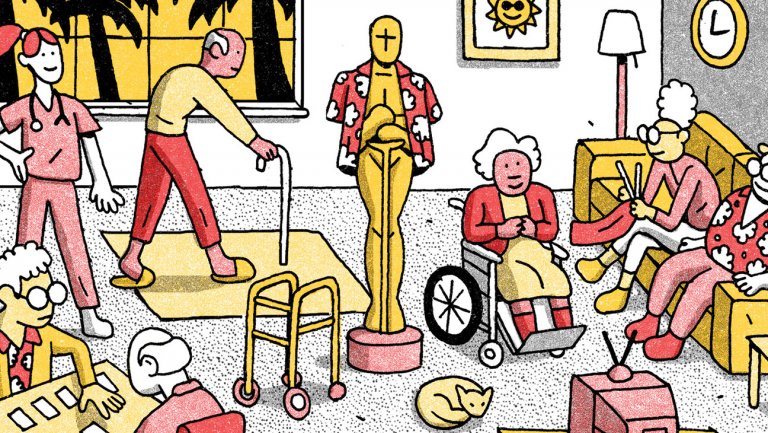 How many movies should the Academy members see?

In the spring of every year, the Oscars season begins in the movie industry. In order for a film to end up on the list of nominees, a big bureaucratic and marketing work is required. Then, the Academy members are sent quite a long list of potential nominees. The voting in each category is done by professionals in that field, while the 10 best films are named by each of them. This is where math comes in - the Best Picture is picked by the “advantage principle”, just like on “Eurovision” - they see which of the 10 movies has been named as number 1 by each member, they add up each vote and that’s how they get the year’s most appraised film. It’s not surprising that an entire company is hired for this job.

But it’s curious - do the 8 thousand Academy members all watch about a 100 films that they’re being sent? As it turns out, they don’t.

“Here’s another piece of the puzzle. Voters are supposed to look at all films in serious contention. This year, that would be about 60,” writes author Stephen King. “There’s no way of checking how many voters actually do, because viewing is on the honor system.”

Stephen King is simply “asking the question”, while actress Carey Mulligan is sure that the Academy members haven’t even seen a majority of the movies. In her opinion, there has to be a test that proves that professionals have reviewed the works of all the nominees.

The films that did get left out are indisputably brilliant.

In 2014, several anonymous sources confirmed in a conversation with the LA Times that they hadn’t seen “12 Years a Slave” because of the heaviness of the topic, but they still named it as their favourite in the Best Picture category.

The situation is similar when it comes to actors who earned an unserious reputation. According to the Telegraph, one of the Academy members shared that often, an actor’s prestige and name are far more decisive than the quality of their performance.

91-year-old actor Terry Moore even recalls precise examples of such cases: according to him, Jennifer Lopez would never make the nominees list because “Hustlers” is a slightly rough, “non-Oscar” movie, and Lopez is not so well perceived as an actress.

The same goes for Adam Sandler who we’re used to seeing in comedies.

Taking all this into account, the question of the Oscars’ relevancy comes up more and more often. Perhaps it’s just a show? More and more people seem to think that way. In order to regain its old importance, the Academy will have to make some major reviews in its hierarchical system.