What Should You Do If Your Oponents Are Always Dumb?

“Don't raise your voice, improve your argument." - If we look at the modern world and the internet, in particular, these words by Desmond Tutu can surely be considered as one of the least followed pieces of advice in the history of mankind.

Share your opinion anywhere (doesn’t matter if it’s a popular one or not) and, most probably, there will always be someone to insult you and say that what you are saying is dumb. And that YOU are dumb as well.

A couple of  years ago, I had a conversation with a journalist from the US and he claimed that Trump’s victory was a complete shock for the American liberal bubble. Although they were not alone: various media outlets all over the world described the shock and the feeling of disbelief that so many people had.

And it’s not about whether the involvement of Russia was  “a hoax” or not. The thing is that suddenly people found out a surprising fact:  many Americans actually wanted to vote for Trump.

Trump - almost the most hated person all over the internet since Justin Bieber - was called dumb and stupid worldwide. Which means that everyone who tends to vote for him should also be dumb. And, all of a sudden they won. Shocking, indeed.

If you’re about to call me dumb, please, wait a second. I don’t support him. Moreover, funnily enough, Trump shares similar attitudes towards his critics.

A piece of cake. Finding the reasons behind other persons’ arguments and positions is much more difficult than just calling them dumb.

“Oh, you are against abortions? You must be dumb!”

“Oh, you are a socialist! Dumb for sure!”

So, what’s with all of your opponents being dumb?  With the development of digital technologies a new term has appeared -  “filter bubble”. It refers to the results of the algorithm, which dictates what we encounter on the web based on our online behaviour. E.g. like on Facebook or Google. Or, to explain it more easily, people use social media in order to access only specific types of political information and news.  It’s our own White Rabbit, leading us to the Wonderland of an echo chamber. What is an Echo chamber? It’s our personal Ministry of Truth, if you will.

It also means no different opinions, points of view, no arguments or counter arguments. Only The Highest truth. Everything and everyone outside of it is untrustworthy. Or even… You guessed it! Dumb (and dumber).

You of course know, that we don't only click and read, we also share. And this turns us into small bricks of the echo chambers of others.

However, some think that the concept of “Echo chambers” is… No. Not dumb. Overstated. Or even a myth. This study examined the online behaviour of around 2000 people in the UK and found that consuming a wide variety of media could actually lead them to more diverse content and perspectives.

Authors claim that  “challenges the impact of echo chambers and tempers fears of partisan segregation since only a small segment of the population are likely to find themselves in an echo chamber”. 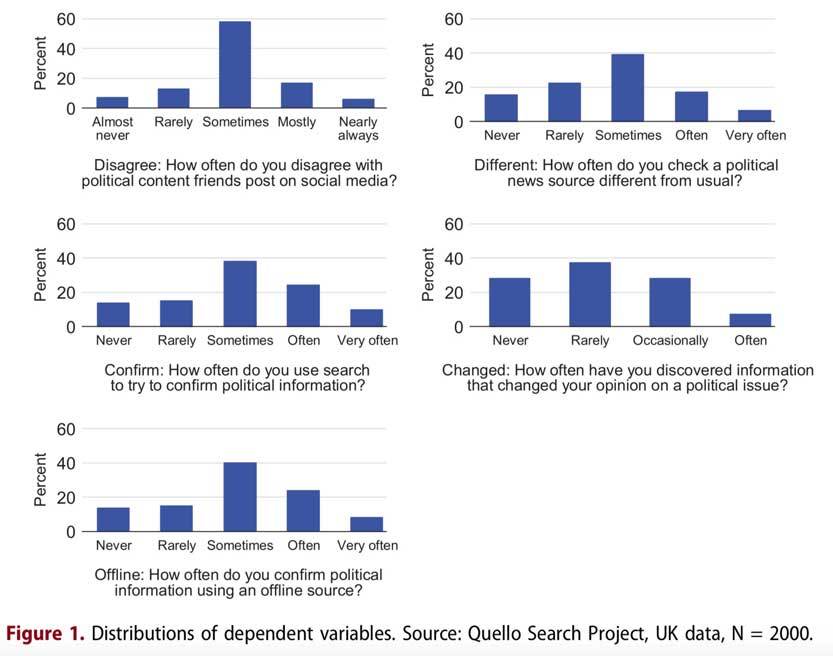 But there also is a counter-counter argument here: The data collected by sceptics of echo chambers is mostly based on self-reporting of people. Which means it’s what people BELIEVE themselves to do.

So, what’s the main problem? The design of internet platforms or the protocols? The propaganda and the concept of post-truth? Some researchers suggest that the concept of “echo chambers” may be a product of the digital era. However, the whole idea behind it is nothing new. We had plenty of them in the past. How about Nazi Germany? Or the medieval Dark ages? Or our parents and grandparents who were reading the same morning newspaper every day?

These questions surely remain open, and mankind now makes first, baby steps in the research of social media, internet, and its influence on our mindset. But, the one thing our different bubbles could probably agree on, is that people who claim to know EVERYTHING more than EVERYONE, could be the dumbest of them all.

As for us, we’re trying to minimize the possibility of echo chambers - if we suppose that there is such a thing - and inform our readers as much as possible, showing them many different perspectives, and asking the unlikely but important questions. Do you want us to  explore these topics further? For example, read more detailed articles about collective narcissism, homophily, and other social theories? Share your thoughts in the comments below.

COVID 19 - Through The Lies and beyond

After the Pandemic: What Will Become of America?

COVID 19 - Through The Lies and beyond

After the Pandemic: What Will Become of America?